You have just won your game in round three of the Bloomin ‘Now Chess Open, and after some refreshments and banter with friends, head back to the arcade to see if the pairings have been made in round four. You notice the referee pinning a sheet of paper on the wall as you approach and you quickly go to check your next opponent. The pairings state that you will face Hilton Rios Filho with white.

Hilton was a fixture in chess in Rio, national champion and city champion. He was a friend, always with an interesting book under his arm, and died in January 2020 of complications from alcohol abuse.

Rated over 2200? Your best-rated opponent in the tournament by far that you’ve never heard of! Is it possible to prepare properly against an unknown player in just one evening? Especially a highly rated one?

Absolutely. And in the following tutorial you will learn how to use ChessBase 16, even without an installed database!

ChessBase has a wide range of tools, but proper preparation can be a daunting task even for the professionals, not to mention the casual gamer playing one of the myriad of opens in the chess world. Ideally, you’ve set up a sophisticated repertoire in your computer and done everything in ChessBase with a fully updated copy of Mega 2021. But even if you only have a copy of ChessBase 16 and no database installed on your laptop, you will be fine with nothing more than an internet connection.

Search with the online database

While many know that when looking for a position on the board you can get instant stats on the opening using the online database, they may not know that the same online database can provide you with a full search for players, results and more .

Click on in the menu ribbon at the very top of the ChessBase start screen On-line.

This dialog opens with a simple query of the player and / or tournament selection. For example, if you wanted to search for all of Kasparov’s games in the famous Linares tournaments, you could just type in “Kasparov Linares” and spit out 168 games from 1990 to 2005. 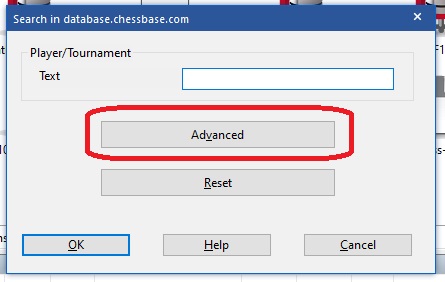 For our purposes, we would like to click Progressive where we see the more detailed search options. We type in Hilton Rios Filho and only select games he played as black as we face him as white. 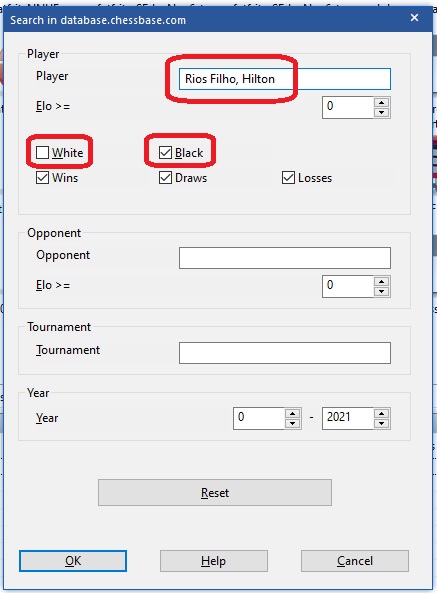 A second later we are presented with 252 games.

Well, we have this big list of games, but now what? Surely we are not expected to all play through 252 and find out something? Certainly not. First, mark all the games in the list. There are several options, but the easiest way is to click on a game with the mouse and then press the keyboard shortcut Ctrl-A.

Note: Ctrl-A is a standard Windows shortcut for Choose allused in most, if not all, Windows programs. For example, click a word in a Word document or on a web page, and then press Ctrl-A. Suddenly everything is highlighted.

Now right click on the highlighted list of games and select Open reference when selected. A split second will pass while it analyzes this. 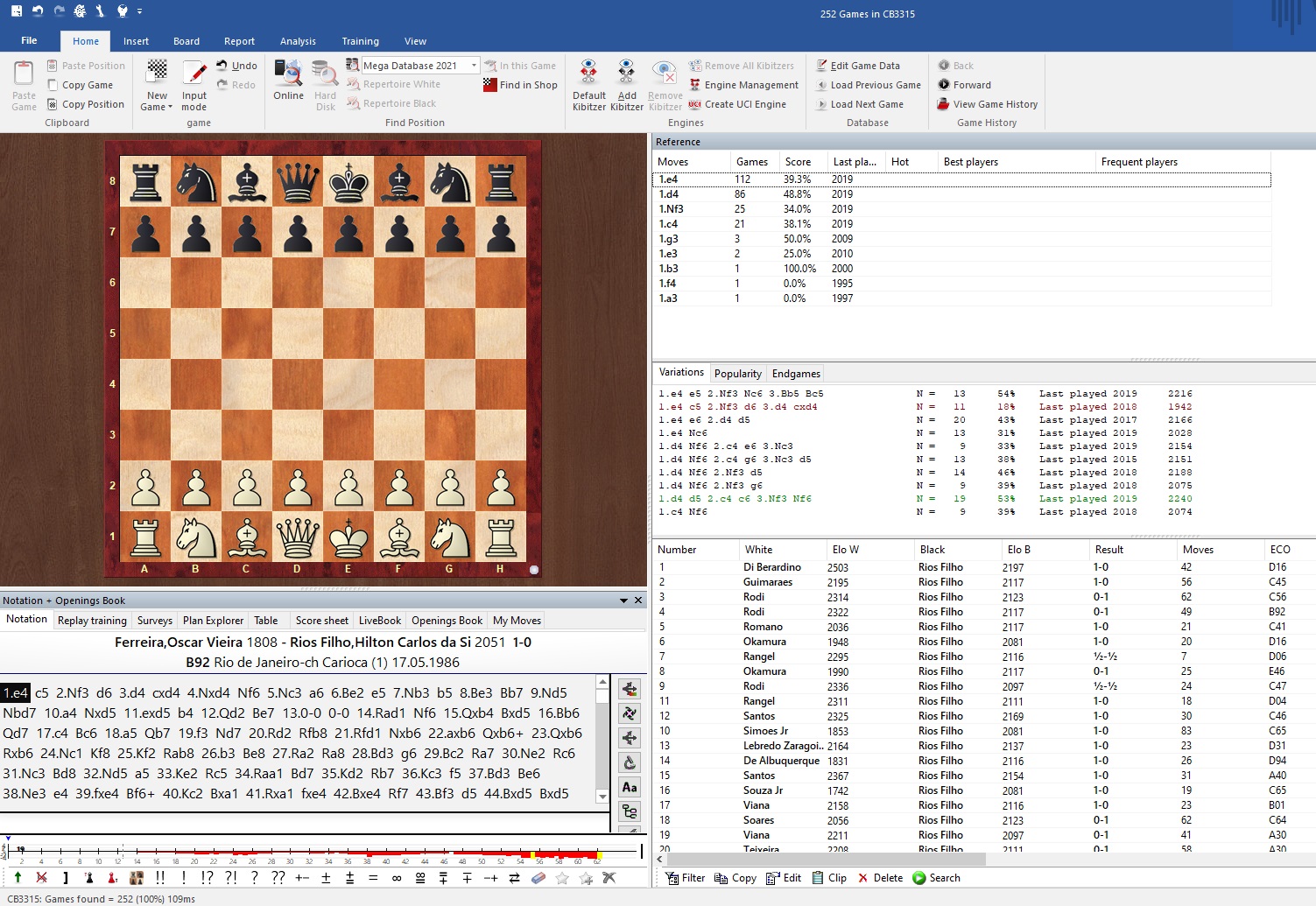 Now we have a far more interesting and useful data window!

It might look big and a little intimidating at first, but it’s really simple and concise as you will soon see. On the left side we have opened a (for the time being) random game, the oldest and the first of the set. At any point, if you click on a game in the list, you can check it out here.

Note: The percentages are always from White’s perspective. So when you see 1… c5 with a score like 35%, it actually means that Black has got a total of 65% with it. Since we are white in this scenario, we want moves or lines where white scored the best. Ie the highest percentage points.

Below that is a list of opening lines in black, green, and red. The green shows the lines where white does best, the red shows the lines where white does worst, and black is the rest. You can click on click one and immediately see what those lines were and what happened. If you want to do so and get back to that point, just click on the first (or whichever) move in the game notation below the board.

Finally, below that, you’ll find a list of games that cover all of the moves and lines shown above.

For our lesson we will assume that it is us 1.e4 Player and that 1.d4 is not a realistic option. Although the table showed 1.e4 If it was an election that our opponent does well against, this does not mean in all openings. Let’s see what Caissa has in store for us and what Hilton usually plays and how he does.

Okay, now we get a clearer picture. It seems like he actually plays a lot better on the Sicilian at 31.5% (remember, this is it White scored!), although he played curiously 1… e5 much more often overall. 38 games against 27.

He’s also played the French over 20 times, but not in four years so our guess is that this probably won’t be his choice tomorrow. If he does, well, we’ll go back to our usual game as we do 1.e4 Players, we have to have something in store against the French as a matter of principle. He’s not Carlsen, we’re not Caruana, and that isn’t decided by some obscure novelty on move 19.

Note: If you want to go back to explore other choices, just click the move in the notation below the board.

Above you can see the move 3.d4 with over 83% for White, and below the green line the line that was best for White is highlighted.

Now we have something interesting! Unsurprisingly, he faced 3.♗b5 most of the times he invited a Ruy Lopez, and against whom he did pretty well, but there is one interesting quirk. He faced the Scot with 3.d4 only three times, with two defeats and one draw. Granted, this is a very small sample, but not only does it mean that he is not about to be experienced in this opening, but it is also associated with unfortunate results (for him).

For the sake of brevity, let’s assume this is an acceptable choice for us and click 3.d4

Now there are only three games left. We mark all three in the list and press Enter to merge the games into one. 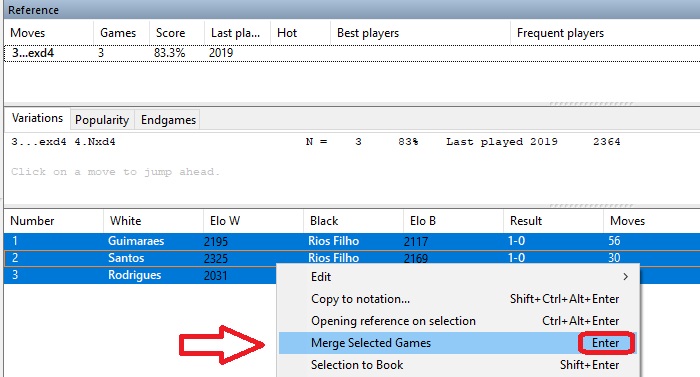 We can now see that a new window is open with the merged games so we can go through the moves and start with more detailed plans.

Thanks to the integrated tools and the online database, we now know what our opponent played and what his possible weaknesses in opening are, so that we can prepare better and face him with more confidence.

Video summarizes the most important points