The United Rugby Championship (URC) has highlighted some of the weaknesses and shortcomings of South African rugby. With experts lamenting a lack of skilled players in the Bulls, Lions, Sharks and Stormers squads, a closer look at the player lists of Premier League clubs in Europe and Japan reveals that almost 200 of South Africa’s best players are currently doing business overseas exercise.

It would be possible to set up three starting eleven with players who have represented the Springboks in recent years or who have trained with the national team.

One could assemble 10 Starting XVs from players with Super Rugby and Currie Cup experience – those who left SA franchises and now for elite clubs in England’s Premiership, France’s Top 14, Japan’s Top League and the URC run up.

It would be possible to put together another XV from South Africans currently representing countries such as England, Italy, Japan, Scotland and the US at the test level. That representation is set to increase as Edinburgh prop master Pierre Schoeman (formerly of the Bulls) and Sharks flank Dylan Richardson were invited to a Scotland training camp last week.

When you grapple with these numbers you will begin to understand how franchises are depleted and why the standard of SA rugby has fallen.

Even more depressing, these numbers don’t take into account those who do business in the second and third divisions overseas or in the less prominent club rugby regions of North America and Eastern Europe.

It’s hard to say how many South Africans are signed to clubs around the world. In 2017 the SA Rugby Annual recorded 332 players at various foreign clubs. When contacted for review, the researchers confirmed that access to the data was limited and that the number of professional players competing overseas is most likely over 500.

The world has changed in the last three or four years. The Covid-19 pandemic has exacerbated the financial situation in South Africa and given professional gamblers more reasons to take chances abroad.

While the European and Japanese leagues continue to welcome a steady stream of South Africans, there is a new wave of players traveling to less traditional regions like the US – after the first major league rugby competition started in 2018 – and Russia. As a result, SA franchises – and even the teams competing in lower leagues like the Currie Cup First Division – have been severely watered down.

Some may point to the springbok’s success during this period and state that the problem is disproportionate. The Bok coach is free to choose as many overseas players as he wants. Since 2018, the national team has seen one of the most successful runs in history, winning the 2019 Rugby Championship, 2019 Rugby World Cup and the most recent series against the British & Irish Lions. SA is currently at the top of the world rugby rankings. The look is great in that sense.

However, the gravity of the situation in South African rugby was highlighted during the first rounds of the URC. Relatively young teams have dealt with the styles of play, referee interpretations and weather conditions in the northern hemisphere.

Books: More than 50% are based abroad

Some commentators have insisted that the franchises will have a different perspective once the Boks – on duty at the rugby championship and then on a triple test tour of Europe – return to their respective clubs in December. This may be the case for the sharks that Siya Kolisi, Lukhanyo Am, and a few others will greet again.

Overall, it is worth noting that 23 of the 42 Bok squad members who recently toured Australia are under contract with foreign clubs. Duane Vermeulen, Handré Pollard and others who formed the core of the team that won the World Cup and defeated the Lions are not based in South Africa.

In short, the overseas clubs rather than the South African franchises will get the biggest boost when the Boks eventually return.

“Something that has to change”

Schalk Brits began his career with Western Province and later played for Saracens in England for nine years. He represented the Boks at two World Cups and hung up his boots after the team’s success in Japan.

Since then, the former Bok hooker has pursued a career in finance. He is well positioned to comment on why players are going overseas as well as the financial situation in SA.

It took the Bulls, Lions, Sharks and Stormers some time to adjust in the first rounds of the first URC tournament, but that’s only part of the problem. The real problem is that so many of SA’s top players have moved to foreign clubs in recent seasons.

“It is certainly something that has to change if the SA teams are to be more competitive in the years to come,” Brits told DM168. “Player loyalty, especially the loyalty of top players, will allow the better teams to improve and build.”

Although SA has excellent youth structures and obviously a top test team, there are concerns that the franchises will no longer keep their best players.

This is particularly worrying for teams hoping to have a long-term impact on the URC and qualify for major tournaments such as the Champions Cup and the Club World Cup. The latter has yet to be confirmed but could start in 2024.

Will the SA teams have a chance at these elite tournaments with the current staff? Possibly. Can you keep most of your staff in the years leading up to the Club World Cup? That is arguably the most important question you will be asking yourself.

“If all of these players were available for an SA team, they would make that team better,” said Brits. “South African rugby has lost a number of players to foreign clubs – and given the money being offered overseas, you can understand why.”

The four SA franchises participating in the first URC are almost unrecognizable by the teams that served in the 2016 Super Rugby tournament.

The Bulls kept three out of 40 players who entered this competition, the Lions two out of 44, the Sharks three out of 38, and the Stormers seven out of 41. The retention rate for all franchises – the four big teams plus the cheetahs and those who have since passed away Kings – 7.5% over a five year period.

It is important for top players to go abroad and broaden their horizons. The Boks playing abroad will eventually return to the national line-up with new insights into foreign players and playing styles.

The same has been true in the past for franchise players who enjoy a sabbatical in the Northern Hemisphere and then return to their teams in South Africa with new skills and information.

Unfortunately, this is no longer the case as fewer and fewer overseas players are returning to strengthen their local teams. Of the 240 players who represented the six franchises in 2016, 148 (61%) went abroad in the following seasons. No fewer than 130 (54%) are still abroad. Only 18 (7.5%) have returned from overseas to play for a local franchise. 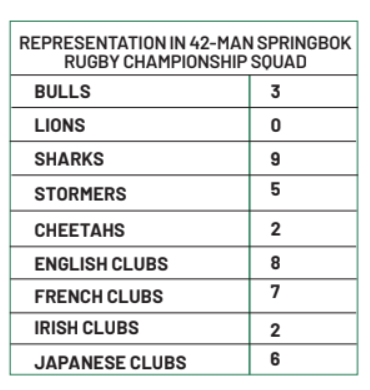 The Lions are the prime example of a top team that has been deprived of its top staff. The Johannesburg-based franchise competed in three consecutive Super Rugby Finals between 2016 and 2018. After a mass exodus over the next few years, only two members of her cadre remain with the union for 2016.

The Lions recently failed to qualify for the Currie Cup playoffs. You were lucky enough to avoid a final spot in the URC’s South African pool. The Stormers, who faced great challenges off the field, will also fight to compete.

The British are optimistic that the Bulls and Sharks will address the problem in the coming seasons. Both teams are now privately owned and it can be said that the structural changes of the past two years will benefit these franchises going forward.

On the flip side, some believe that SA rugby’s foray into the northern hemisphere will result in more departures than ever.

Elite clubs do not need to send scouts to South Africa to evaluate promising youngsters or established veterans competing in the Super Rugby tournament or Currie Cup as they have the advantage of seeing these players in the URC or Champions Cup.

One would hope that the franchises can find a way to keep their best players – their best youngsters. It would be a tragedy if Elrigh Louw, Wandisile Simelane and Evan Roos – to name a few – find themselves abroad instead of at a local franchise in three years’ time.

The Bulls, Lions, Sharks, and Stormers won’t all keep their players for the next five years.

However, you have to achieve a retention rate of more than 7.5% during this period if you want to fight for a big title and realize your potential in Europe. DM168 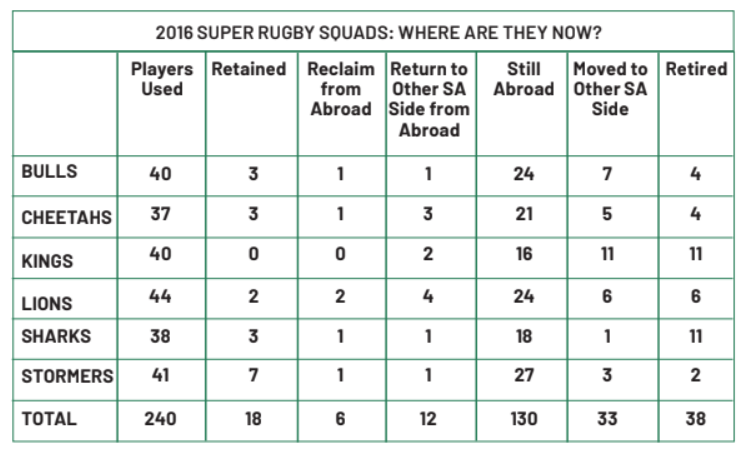 This story first appeared in our weekly newspaper, Daily Maverick 168, which is available for R25 at Pick n Pay, Exclusive Books and airport bookstores. For your nearest specialist dealer, please click on here.